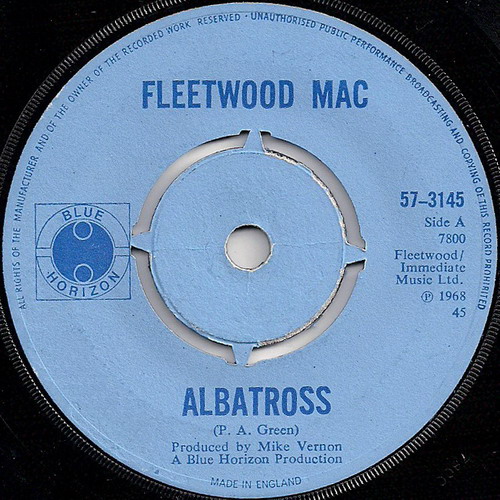 Blue Horizon Records was a British blues independent record label, founded by Mike Vernon in 1966. Its roots lay in Vernon's mail order label Purdah Records, which released just four 7" singles; including "Flapjacks" by Stone's Masonry (featuring Martin Stone, later to join Savoy Brown and Mighty Baby); and another by John Mayall and Eric Clapton "Bernard Jenkins", and "Lonely Years". Only 99 copies of each are thought to have been pressed - limited originally to avoid purchase tax - although it has also been said that the number was as high as 500.

After briefly forming the Outasite label, Vernon switched to Blue Horizon in 1966, issuing singles and a small number of now-unobtainable albums by U.S. blues artists, including Doctor Ross. A world-wide licensing and distribution deal with CBS heralded the glory years of the label. Starting with two 7" singles with combined CBS/Blue Horizon stamps featuring Fleetwood Mac and Aynsley Dunbar there followed a string of singles and albums by both British and U.S. blues artists, both licensed and newly recorded. Some releases featured Mike Vernon produced recordings of U.S. artists such as Otis Spann and Champion Jack Dupree, backed by British blues players such as Peter Green, Rory Gallagher, Paul Kossoff, Stan Webb, Pete Wingfield and Duster Bennett.

The label produced chart hit singles for Fleetwood Mac and Chicken Shack and a string of albums in imaginative sleeves. The distinctive blue label singles eventually gave way to red and then no-centre white labels as the blues boom died away. The label ceased production around 1971, and all its titles are collectible today. Later vinyl re-releases by both Sire Records in the US and Line Records kept interest alive, but CD reissues were limited until Vernon himself re-emerged in the 21st century to remaster the best material and do justice to the Blue Horizon legacy. In 2010, it was reported that the label would be reactivated by Seymour Stein, and Richard Gottehrer, although it would not have access to the original catalogue. On 12 June 2012, BBC Radio 4 broadcast Cerys Matthews' Blue Horizon, a documentary about Blue Horizon Records.