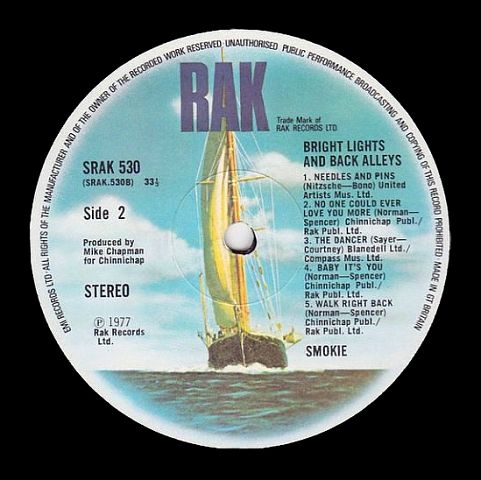 Rak Records is a British record label, founded by record producer Mickie Most in 1969. Rak was home to artists such as Herman's Hermits, Suzi Quatro, Mud, Kenny, Hot Chocolate, Smokie, Arrows, Span, Racey and Kim Wilde. Rak Records were distributed via a licensing deal with EMI, which bought the company and its master recordings from Most in 1983. Most kept the company name and his RAK Studios, which still exists in St. John's Wood along with Rak Publishing. The latter company represents artists such as Joan Jett, Ben Taylor and KK. In 1986, Most defected the label from EMI to PRT Records which handled the last releases until February 1988. Due to the records not being hits, the label folded. However, 26 years later in late 2014, Rak Records was revived as a label for new artists releasing both downloads and 7 inch vinyl in the form of a singles club. The Cadbury Sisters, Trojanhorse, and Beautiful Boy were the new signings. They recorded their own original songs as the A-sides, and covered a classic Rak artists cover as the B-side. The Cadbury Sisters covered Steve Harley's 1975 classic "Make Me Smile (Come Up And See Me)" (even though it was originally released on the generic EMI label), Trojan Horse did Cozy Powell's "Dance With The Devil", and Beautiful Boy did "Kids In America". As PRT Records is no longer in existence, the label is now distributed by Gearbox Records using the original sailing yacht paper label and the records packaged in the original royal blue paper sleeves.

When Warner Music Group acquired Parlophone from EMI in 2013, this included the rights to Hot Chocolate and other artists.